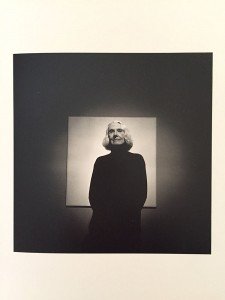 Independent at an early age, Florence Miller Pierce ventured from her home in Washington D.C. in 1936 to pursue her passion for art. Her journey led her to the most renowned art destinations in the United States; New York, Los Angeles and Taos. Her final residency was in New Mexico where she developed her most notable work, the resin relief. The purity of light and color within each piece reflect her western inspiration.

At age 17, Florence was the only female in Emil Bisttram’s Taos School of Art. Later she was asked to join the Transcendental Painting Group, formed by Bisttram and Raymond Jonson. Although she was a member for only a few years, her work embodied their goal; “to carry painting beyond the appearance of the physical world through new concepts of space, color, light and design”

In Bisttram’s school, Florence met her husband Horace Towner Pierce, another student who shared her ideals. For the next nine years, they moved from New York to Los Angeles and finally back to Albuquerque in late 1949 due to Horace’s health problems. It was an artistically productive period for Florence, both in painting and in film.

Following the death of her husband, she began to explore a variety of medium in the late 60’s and into the 70’s that laid the path to her successful future. While working with poured resin, she discovered its translucent quality by accident as it spilled onto a sheet of aluminum. The resulting shimmering surface inspired the development of her new art form.

Included in an impressive list of exhibitions, collections and publications, Florence is an icon of pioneering thought and technique. She is a part of museums ranging geographically from New Mexico to Japan. Her group exhibitions have included other brilliant women such as Georgia O’Keefe, Maria Martinez and Agnes Martin. Florence’s legend has been established in over 40 articles and books as well as 4 major television shows.